skip to main | skip to sidebar

HERE WE GO AGAIN...Let's get it right this time. 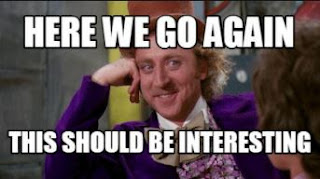 "A group of Progressive city councilors introduced the ranked-choice voting proposal earlier this month. Burlington used ranked-choice voting, also known as instant runoff voting, from 2005 to 2010. Voters rank candidates in order of preference, and if their first choice is eliminated, their vote is reassigned to their second choice. The process continues until one candidate earns 50 percent or more of the vote. The current voting system only requires a 40 percent majority to win.

The city council voted 9-3 on December 2 to send the measure to the charter change subcommittee for review. Shannon was one of the three no votes. At that meeting, she told her colleagues that she supports ranked-choice but felt the charter committee would need more time to study it or 'other election methods.' Constituents had told her that ranked choice was too complicated, Shannon said.

The public should be given more time to vet the proposal since 'confusion in our voting system is not a good thing,' she said."

Charter Change Committee took no action because Shannon and Paulino were going to a Dem party strategy session. This time around, Dems are nervous about IRV, now called RCV, because their mayoral candidate likely will not clear the 50% requirement, triggering the new tallying system. Well, here we go again.

Article in the Christian Science Monitor:

Why do you say that IRV nevertheless elected the “wrong” candidate?

The questions of whether hand count should rely on re-tabulation by machine, and whether computer security is adequate for voting (good enough for banking, why not voting?) have been discussed in Burlington lately.
Recount of primary democrat gubernatorial election allowed machine retab, apparently because time was of essence and Racine was looking for big clerical errors and overlooked ballots, not scattered ballots misread by the machines. However, hand recount is a superior system for many reasons, and if you can't hand count with original ballots, you can't recount reliably.
This leads to the issue of voting online. We transact personal business online with more and more confidence, and some think if we can bank online securely, we should be able to vote online as well. Actually the principle is the same, with opposite import: banks control transactions, cities/towns control voting.
Banks can track transaction to source, then confirm, and reverse transaction if necessary; ballots are anonymous. Tallies at polls prevent ballot bag stuffing in City Hall after hours, which is a major reason why IRV created distrust and was finally abandoned. Ballot bags from one city ward were opened several times, after hours, in city hall with no panel of observers present.
Computer Voting Machines VS Hand Count

Another City skeptical of IRV

The Rules and Open Gov. Committee of San Jose City Council voted unanimously to put off any more discussion of IRV/RCV until Q1 2011 when a report from the City Clerk can be made on Costs and recent results from the elections in Nov.
Fact check on pro-IRV testimony: http://tinyurl.com/IRVSJRules .
This YouTube video is hilarious. The President of Californians for Proportional Representation actually testifies that the city needs IRV because campaigns are so hard on candidates.

Like most of the hype around IRV, FairVote's so-called FACTS are promotional advertising. IRV's fast food run-off vote and it's reconstituted majority might as well be called "The McVote."
If you wanted the facts about the nutritional value of fast food, would go to the corporate website, or to an independent research lab?
FairVote's paid mission is to promote IRV. In contrast, the IRV Fact Check Fact Check Blog is an un-funded effort by election transparency expert Joyce McCloy and other researchers who for many years have cataloged reports, studies and news articles about instant runoff voting and its unintended consequences at http://www.instantrunoffvoting.us/
Nothing is more critical to democracy than a free, honest and verifiable voting system.

NC being sold a pig in a poke

Several people commenting on an article about IRV in an NC newspaper know quite a bit about Burlington VT. They throw around names like Kurt Wright, Vince Dober and Ward 7 runoff election with obvious familiarity. Check it out... http://wake.mync.com/site/wake/news/story/51610/

San Francisco voters challenge IRV, claiming they have a right to vote in all rounds after their first choice candidate is eliminated. Judge inclined to rule quickly so both sides can move forward with appeals. Basically, people who vote want to vote in every round, and think over each choice anew in subsequent rounds.

In spite of praise from the mayor (ahem!) for our strong voter turnout, for us it was low and there were many voter information and polling location problems that could have suppressed the vote. People at the polls in Ward 7 reported cars turning away when they saw the confusion and congestion at the narrow entrance to the Miller Center. Councilor Dober did a survey of Ward 7 voters, and 85% of respondents rejected the Miller Ctr as a polling place. In Ward 4, lack of signage and false report of moving the polling place similarly could have suppressed the vote in that ward.

Interested parties gather to review the snags, and plan ways to welcome and inspire voters in future elections. A task force will work on this between now and the next election.

As shown in [the 2009 Burlington mayoral] election, IRV does not "solve the spoiler problem," does not "allow voters to vote their true preference without fear of inadvertently electing a candidate they cannot stand," and it does not elect candidates "actually preferred by a majority."

These and other pathologies are not rare. IRV in this election did not serve as a "bulwark of democracy" – rather the opposite.

We shall show by considering Burlingon's 2009 mayoral election that all the claims by Bouricius and FairVote are false.

"I think we had a hard-fought campaign and we need to accept the results and say let's move forward," said Rep. Jason Lorber, of the 50 Percent Matters campaign .

2005/2010 Voter disapproval of IRV increased in every ward in the city.

Repeal IRV RRT is watching very closely. Chittenden County Reps asked to sponsor the Charter Change bill that will repeal IRV. Expect that all will sponsor since they customarily respect the will of the people.

H.0773 An act relating to approval of amendments to the charter of the city of Burlington

The next step -- charter change goes to the legislature for approval

Voters Have Reason to Worry
http://utahcountvotes.org/UT/UtahCountVotes-ThadHall-Response.pdf

Here's how the IRV vote broke down by ward

Listen to real Burlingtonians, from all wards!

Burlington Voters Speak out about Instant Runoff Voting
after election 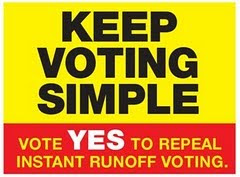 Exit Poll data and analysis identifies perverse outcome and elitism. For those who are intrigued by, or concerned about, these issues, here is the data and the report. Ideologues will dismiss it, but for people who want to make up their own mind, here's the link:
http://www.uvm.edu/~vlrs/IRV.pdf

Ask yourself, why is IRV more popular with politicians than with voters? Perhaps because it sidelines minor candidates, lets people vote for them in a meaningless way, and then major candidates capture 2nd, 3rd, 4th etc place votes to create a false IRV majority that they can call a mandate.

Wed, Feb 24 - Signs will be battered by snow and plowing if not pulled until after the storm.